Allison Chittem Hartnett and Lourdes C. de Armas-Suarez obtained a favorable ruling on behalf of WLSC’s Employer/Carrier client, defeating a workers’ compensation permanent and total disability claim. The Claimant in this case was working as a mezzanine installer when he suffered a compensable fall from a mezzanine and injured his back.

Medical treatment was authorized and the Claimant was diagnosed with a L2 compression fracture. Back surgery was performed and the Claimant was placed at maximum medical improvement approximately one year thereafter. Subsequently, the Claimant treated with a psychiatrist, Dr. Diaz, and a physiatrist, Dr. Tannenbaum. After previously filing and dismissing Petitions for Benefits twice before, the Claimant filed a third claim for Permanent and Total Disability benefits asserting that based on his physical and vocational limitations, he was unable to work in a sedentary capacity within fifty miles of his home. The defense theory was that the Claimant had shown the ability to work throughout the years and that surveillance called into question his credibility.

Dr. Tannenbaum also opined that the Claimant had not been fully candid with him as to the Claimant’s abilities. Vocational experts’ opinions were also presented to the Court on behalf of both the Claimant and the Employer/Carrier.

In addition, Mrs. Hartnett and Mrs. de Armas-Suarez submitted evidence which ultimately established that the Plaintiffs’ had performed various jobs in a supervisory capacity after his work accident, including a job that required him to fly to the Turks and Caicos Islands, a job that required him to travel to other counties in Florida, and a job performing work in an automobile repair shop.

Based on the surveillance and the Claimant’s demeanor at the trial, the Judge found the Claimant exaggerated the overall impact of his compensable accident and surgery, found inconsistencies in his deposition testimony and live testimony, and ultimately found him not to be a credible witness. In conclusion, the Court found that after considering all of the evidence, the Claimant did not prove that he was entitled to permanent total disability benefits. 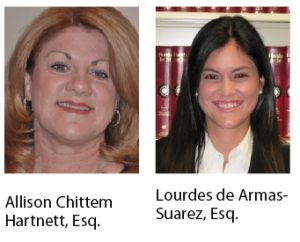