Robert J. Strunin and Michele E. Ready, partners in the Firm’s Miami office, collaborated again to secure JCC and First DCA rulings on an important point on Florida Worker’s Compensation Law – this time regarding the right of the Employer/Carrier to terminate non-PTD indemnity benefits following 401 weeks from the Claimant’s date of loss pursuant to Fla.Stat. §440.15(3)(c)(2002).

Robert was instrumental in securing a ruling from JCC Daniel A. Lewis that the injured worker had no eligibility for temporary indemnity benefits because more than 401 weeks had expired from the date of loss. The cited statute was clear on its face, and distinguished from case law regarding a 104-week cap on temporary benefits.

Strunin cited case law supporting his argument. In his final compensation order dated April 6, 2012 (the case was tried on April 5, 2012), Judge Lewis detailed the history of the case and found that the at-issue statute was applicable and denied temporary indemnity benefits. Subsequent to Judge Lewis’ ruling, the Claimant, through his attorneys, appealed. 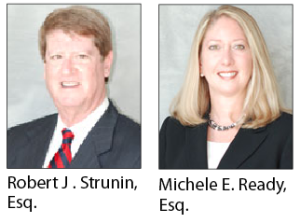