A poorly installed ceiling fan spontaneously fell and struck the tenant of a South Florida rental condominium, who was hospitalized as a result of the accident. The tenant sustained a laceration over the right eye requiring suturing in the emergency room and leaving a one-inch scar. The tenant brought suit against her landlord who did not install the fan. A Jury Trial was held in Palm Beach County. The landlord’s insurer, Universal Property and Casualty Insurance Company, elected to make no more than a nuisance offer on the case and proceeded to Trial. Despite adverse Trial rulings by the Judge, the Jury returned a verdict of no negligence on the part of the defendant.

Walton Lantaff’s Managing Partner Richard Rosenblum obtained this defense verdict on behalf of the new owners and their insurance carrier, Universal Property and Casualty Insurance Company, with the assistance of associate Thomas Fabricio, both from the firm’s Fort Lauderdale office. The fan had been installed by the prior owner without required permits and inspections. Plaintiff argued that the defendants failed to inspect the premises and that such an inspection would have revealed the admittedly dangerous installation. No permits were pulled for the installation, or when the insureds began to rent the property.

Plaintiff argued that the lack of mandatory permits for the installation, as well as the lack of permits required of all landlords in this municipality, was a statutory violation. Under Florida law, a statutory or code violation can be used as evidence of negligence. Plaintiff contended that not only were the lack of permits evidence of negligence, but that the burden of proof should be shifted from the plaintiff to the defense. This would have meant that the plaintiff did not need to prove the insureds were negligent, obviously a key issue. Mr. Rosenblum said, “there was no question that the fan, mounted by the prior owner in the master bedroom of the condo had been improperly mounted, so we decided to stipulate to the Court and Jury that the installation was improper. This preserved our credibility with the Jury to argue fault, causation and damages.” Mr. Rosenblum also noted that the Trial Judge made his job harder by making a significant ruling in favor of the plaintiff.

The Judge suggested to plaintiff’s counsel, at the close of the evidence, that plaintiff move for Directed Verdict on the issue of lack of comparative negligence. Upon the Judge’s prompting, plaintiff’s counsel immediately made the Motion for Directed Verdict, which the Judge granted. This ruling voided the defense’s ability to argue that the tenant’s damages should be reduced by her own comparative negligence. As a result, the only question for the Jury other than damages was whether the insureds were negligent.

Plaintiff then argued that Res Ipsa Loquitor, a rule of evidence, should apply. Res Ipsa is used when the plaintiff is injured in a situation where the defendants have exclusive control of the instrumentality causing the injury, the plaintiff is without negligence and the accident would not have occurred without negligence. “It is, in essence, a method to impose strict liability,” said Mr. Rosenblum. “If anyone had control of the fan, it was the plaintiff.” This time the Judge ruled for the defense, and the Res Ipsa motion was denied.

But, the defense faced another hurdle. The insureds had lost an inspection report generated when they had purchased the unit several years before the date of loss. The tenant argued that the loss of this report amounted to spoliation (loss of evidence). Whether accidental or intentional, a finding of spoliation could have created a presumption that the report contained information detrimental to the owners in regard to the fan, again creating a legal presumption of negligence. Again, the plaintiff’s attorneys failed in their attempt to establish the owner’s negligence.

In this significant case, where the past medical expenses alone exceeded $31,000, the tenant asserted she had sustained a vitreous detachment in the right eye with resulting loss of visual acuity, partial loss of peripheral vision and that she now suffered from floaters. She also claimed she was at heightened risk for a future retinal detachment.

Her neurologist opined that in addition to the injury, she suffered from Post Concussion Syndrome with accompanying memory loss, mental confusion and headaches. She also complained of neck pain and aggravation of pre-existing anxiety and depression.

After closing arguments, wherein Mr. Rosenblum cogently made the case that the owners were not negligent, the Jury deliberated for less than two hours before finding for the owners and returning a Defense Verdict. As the tenant could not prevail, even with a Directed Verdict in her favor on comparative negligence, plaintiff attorneys have not appealed. 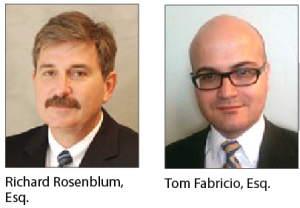